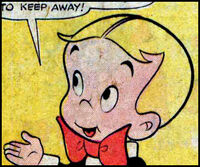 Despite any negative stereotypes associated with his incredible wealth, Richie Rich is portrayed as kind and charitable. (In fact, his moniker is "the poor little rich boy.") He lives in an expensive mansion and owns at least two of everything money can buy. Richie appears to be around seven to ten years old and wears a waistcoat, a white shirt with an Eton collar (which is obscured by a giant red bow tie), and blue shorts. He is occasionally seen attending school in his hometown of Richville.

Gloria is Richie's love interest. She likes him, but tries to discourage him from giving her expensive gifts. Sometimes, Gloria forbids Richie from spending a single cent on her in order to help break this bad habit.

Mayda has a huge crush on Richie, but because of her snobbish nature and only has eyes for Gloria, those feelings are not returned, despite her efforts. However, he is willing to invite her in some events or help her in situations, implying that he only sees her as a friend.

Reggie is Richie's cousin. He is known to play pranks on people for his own pleasure, including Richie and his family.