View source
watch 01:36
We're Getting Mutants in the MCU - The Loop
Do you like this video?
Play Sound
Gloria Glad 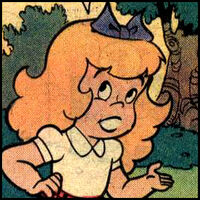 Gloria Glad is the no nonsense girlfriend of Richie Rich who actually likes him for himself and not for his money.

Richie Rich has a crush on her and she spends time with him. She returns those feelings, but was intolerant of him spending a lot of money on gifts for her (in her first appearance "First Date", she doesn't seem to mind but grew reluctant afterwards).

Not much of their relationship is known, but Reggie is shown to have a crush on her sometimes. However, those feelings were not returned nor was she aware of it.

Mayda Munny despises Gloria and considers her a rival of Richie's affections. She appears to be the polar opposite of Gloria because Mayda likes Richie because of his wealth and Gloria likes Richie for the type of person he is and did not care about his wealth whatsoever.

He is Gloria's father. He doesn't mind Richie but sometimes wanted her to keep her mind off him while she does more important stuff. Like Gloria, he is also concerned for Richie's apparent extravagance.

Prunella is Gloria's aunt. She is unaware that Gloria does not want Richie to spend so much money on her, only believing that he is stingy.

She is Gloria's cousin who looks exactly like her. However, Sharon is the opposite of Gloria. She even tries to get Richie to give her expensive gifts, indicating that she can be greedy.