View source
watch 01:36
We're Getting Mutants in the MCU - The Loop
Do you like this video?
Play Sound
Casper the Friendly Ghost 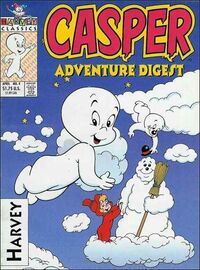 Casper the Friendly Ghost is the protagonist of the Famous Studios theatrical animated cartoon series of the same name. As his name indicates, he is a ghost, but is quite personable.[1] According to the 1995 feature film Casper, his family name is McFadden, making his "full" name Casper McFadden.

Given that Casper is depicted as a ghostly, portly little boy, there is a controversy among fans of the series as to whether or not he is a dead child. Early Casper cartoons seemed to suggest this, as they portrayed him residing beside a gravestone. Specifically, the short There's Good Boos To-Night featured Ferdie, a fox befriended by Casper, coming back from the dead as a ghost. Casper's death (as well as the reason why he became friendly) have been disputed since that time.

This somewhat macabre premise was later abandoned in favor of the idea that ghosts were merely a type of supernatural being, similar to ghouls, goblins, etc. He was thereafter portrayed with feet and shown to have ghostly parents and became slightly slimmer. In the 1960s and 1970s, the stock answer provided by Harvey Comics in response to those wondering how Casper died was that he was a ghost simply because his parents were already ghosts when they were married.[2]

The 1995 feature film Casper, however, revived the notion that Casper was a deceased human and provided a brief account of his death. According to the film, Casper was a young adolescent who went sledding all day and died of pneumonia. The first direct-to-video film to follow the feature, Casper: A Spirited Beginning, showed Casper's early days as a ghost, not showing how he died and ignoring the story provided in the previous film, although it does explain how he became friendly.

Creation and Success at Paramount

Casper was created in the late 1930s by Seymour Reit and Joe Oriolo, the former devising the idea for the character and the latter providing illustrations.[3] Intended initially as the basis for a 1939 children's storybook, there was at first little interest in their idea. When Reit was away on military service during the Second World War before the book was released, Oriolo sold the rights to the book to Paramount Pictures' Famous Studios animation division, for which he had occasionally worked.

The Friendly Ghost, the first Noveltoon to feature Casper, was released by Paramount in 1945 with a few differences from the book. In the cartoon adaptation, Casper is a cute ghost-child with a New York accent, who prefers making friends with people instead of scaring them (Casper used to scare people but got tired of it all). He runs away from home and goes out to make friends. However, the animals he meets (a rooster, a mole, a cat, a Herman, and a group of hens) take one horrified look at him and run off in the other direction. Distraught, Casper unsuccessfully attempts to commit suicide by laying himself down on a railway track before an oncoming train (apparently forgetting that he's already dead) before he meets two little children named Bonnie and Johnny who become his friends. The children's mother at first is frightened of Casper, but later welcomes him into the family and sends him off with her children to town wearing clothes after he wards off a greedy landlord.

Casper appeared in two more subsequent cartoons by Seymour Reit and Joe Oriolo, There's Good Boos To-Night and A Haunting We Will Go. (There's Good Boos To-Night differs wildly from later Casper cartoons: although Casper trying to find a friend and scaring everyone away before succeeding also occurs in later cartoons, the tone of the cartoon turns dark when a hunter and his dogs appear. Although Casper scares them away, the fox he has befriended is killed, but happily returns as a ghost.)

These were later adapted into Noveltoons before Paramount started a Casper the Friendly Ghost series in 1950, and ran the theatrical releases until the summer of 1959. Nearly every entry in the series was the same: Casper (now slightly thinner than his obese self that first appeared in the earlier cartoons) escapes from the afterlife of a regular ghost because he finds that scaring people can be tiresome year after year, tries to find friends but inadvertently scares almost everyone, and finally finds a (cute little) friend, whom he saves from some sort of fate, leading to his acceptance by those initially scared of him. The cartoon series also boasted a catchy title song which was written by Jerry Livingston and Mack David. By 1955, however, composer Winston Sharples composed an entirely new instrumental theme for Casper's cartoons.

Casper went on to become one of the most famous properties from the Famous Studio. Casper was first published in comics form in 1949 by St. John Publications; Alfred Harvey, founder and publisher of Harvey Comics began producing Casper comic books in 1952, and in 1959, Harvey purchased the rights to the character outright.

After Harvey bought the rights to Casper and many other Famous properties in 1959 (including Herman and Katnip, Little Audrey, and Baby Huey), they began broadcasting the post-September 1950 theatrical Famous shorts on a television show sponsored by Mattel Toys titled Matty's Funday Funnies on ABC in 1959 which introduced the Barbie doll to the public. The other Famous produced Casper cartoons had already been acquired by television distributor U.M.&M. T.V. Corp. in 1956. U.M.&M. retitled just "A Haunting We Will Go", but credited "Featuring Casper The Friendly Ghost" as "Featuring Caspers Friendly Ghost".

New cartoons were created for The New Casper Cartoon Show in 1963, also on ABC. The original Casper cartoons were syndicated under the title Harveytoons (initially repackaged as Casper and Company) in 1962 and ran continually until the mid-90s. Casper has remained popular in reruns and merchandising, and Hanna-Barbera produced two holiday specials, Casper's First Christmas (which also starred Yogi Bear, Huckleberry Hound, Snagglepuss, Quick Draw McGraw, Augie Doggie and Doggie Daddy) and Casper's Halloween Special (aka Casper Saves Halloween), and also the Saturday morning cartoon series Casper and the Angels (a animated takeoff on two live action hit shows Charlie's Angels & "CHiPS") in the autumn of 1979, all on NBC. Also featured on the NBC version was a big ghost named Hairy Scary (voiced by John Stephenson). None of Casper's original co-stars appeared in the show.

Numerous Casper cartoons were released on home video by Universal Studios (via MCA Inc.), which also adapted the friendly ghost into a live-action feature film entitled Casper in 1995, where he and his wicked uncles, the Ghostly Trio, were done with computer animation. The film constructed a back-story for Casper and is the only time in the series that the question of his death has been addressed. According to the film, Casper was a twelve-year-old boy living in Whipstaff Manor with his inventor father J.T. McFadden until he died from pneumonia after playing out in the cold until it was past nightfall. Much of the backstory he is given in the film is contradicted by other Casper media. Whipstaff Manor appears to represent the historic Schroeppel Mansion in Syracuse, New York, which is a national monument. McFadden seems to be the name the writers used because the actual family named von Schroeppel lost a twelve year old son named Casper to drowning in Morristown, New York, who is said to haunt the family's estate in Syracuse. Casper was a name that could be used but not the actual name of the family.

In 1996, Amblin Entertainment & Universal Cartoon Studios created a new Casper series for Fox Kids, based on the 1995 feature, that lasted two years and was never seen on television again after 1998. Two live-action direct-to-video follow-ups, Casper: A Spirited Beginning and Casper Meets Wendy, which introduced Hilary Duff, to the film were later made. They were followed by Casper's Haunted Christmas (starring Spooky and Poil from the animated spinoff of the first movie), and Casper's Scare School, which were done entirely in CGI with no live-action elements. These films are often referred to as being "sequels" to the 1995 feature despite the fact that they heartily contradict the feature and do not appear to even take place in the same universe.

In 1995, Justin Pierce portrayed a character named Casper in the movie Kids. In one of the scenes within the movie, he sings a song that goes "Casper the dopest ghost."

In 2001, Harvey Entertainment was acquired by Classic Media which continues to license the Harvey properties including Casper.[4]

In 2009, a new Casper comic was published, called Casper and the Spectrals by Arden Entertainment. Much like The Man of Steel and Batman: Year One did with their respective characters, it revamped Casper and several other Harvey characters for a new audience. After selling 6,400 copies of the first comic, the last two issues were published in 2010.

Cecil H. Roy voiced Casper in the majority of the Famous Studios cartoons along with Mae Questel. Casper was voiced by Norma MacMillan in The New Casper Cartoon Show, by Julie McWhirter in the Hanna-Barbara cartoons, by Malachi Pearson in the 1995 movie Casper and The Spooktacular New Adventures of Casper, by Jeremy Foley in Casper: A Spirited Beginning and Casper Meets Wendy, by Brendon Ryan Barrett in Casper's Haunted Christmas and by Devon Werkheiser in Casper's Scare School. Devon Sawa is the only actor to play the character in live-action, portraying him in a sequence from the 1995 film in which Casper was temporarily brought back to life.

This is a list of comic book titles that featured Casper as the main character (or main co-character). He also appeared in back up stories and made guest appearances in many other Harvey comic books like; Little Audrey, Paramount Animated Comics, Spooky the Tuff Little Ghost, Wendy the Good Little Witch, and The Ghostly Trio.