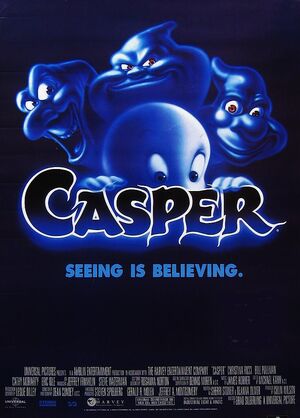 Release Date(s)
May 26,1995
Previous Film
Next Film
—
The Spooktacular New Adventures of Casper
()

In the town of Friendship, Maine, two young boys Nicky and Andreas enter a creepy, old mansion called Whipstaff Manor, apparently on a dare, but they are scared away by a ghost named Casper. Later, after the death of her father, neurotic and spoiled heiress Carrigan Crittenden discovers he has only left her Whipstaff Manor in his will. Carrigan and her assistant, Dibs, learn of a treasure allegedly hidden somewhere within the manor, but upon investigation they find the manor haunted by Casper and his obnoxious prankster uncles, the Ghostly Trio, who scare the two off the property. The two make several attempts to force the ghosts out of the manor by way of paranormal experts and a demolitions team, to no avail. Meanwhile, a lonely Casper watches a news report of paranormal therapist James Harvey and is instantly smitten with his teenage daughter, Kat. Longing for a friend, this provides Casper the idea of inspiring Carrigan into summoning Dr. Harvey to Whipstaff. Harvey and Kat have an estranged relationship due to the former’s reputation and obsession with contacting the ghost of his late wife, Amelia. Moving into Whipstaff, Casper's attempt in befriending the Harveys fails when his uncles try to scare them out of the house.

The next morning, Casper manages to gain the Harvey's trust when he serves them breakfast. He follows Kat to school where she becomes popular when her class learns that she is living in Whipstaff, and agrees to host their Halloween party there. However, Amber, Kat’s classmate who immediately dislikes her, becomes envious of Kat stealing her spotlight, since the party was originally going to be held at her place. Amber plots with her boyfriend, Vic, to humiliate Kat during the party. Harvey meanwhile attempts to have therapy sessions with the Ghostly Trio, who reveal that they know Amelia; in exchange for getting Carrigan to leave them alone, they promise to go through the "red tape" involved to get Harvey a meeting with his wife.

Meanwhile, Kat learns Casper has no memory of his life and unlocks and restores his old playroom to remind him. Casper comes across an old wooden sled, recalling that when he was a young boy, his father bought it for him. Casper was so happy that he played outside on a very cold day until he caught a severe cold and died of pneumonia. After his death, he became a ghost to keep his father company. A newspaper article reveals that Casper’s father was declared legally insane after he built a machine named the Lazarus, which he claimed could bring the dead back to life. Casper and Kat venture down into the manor’s basement, where they discover the Lazarus. Carrigan and Dibs sneak in, steal the formula that powers the Lazarus, and plot to use the machine to their advantage, believing it could grant them immortality. However, the two attempt to kill each other in order to test the theory and retrieve the treasure which they think is in the basement's locked vault; as a result, Carrigan falls off a cliff to her death, and rises as a ghost.

Meanwhile, Dr. Harvey becomes dispassionate after the trio pull a prank on him, prompting them to take him out for a night on the town. Unknown to Harvey, they plan on killing him to make themselves a quartet, but end up having a change of heart after a drunken Harvey states that he is going to tell Carrigan off so they can stay in their home. However, Harvey accidentally falls to his death down a manhole.

Back in the secret laboratory, Carrigan confronts Casper and Kat, steals what she believes to be the treasure from the vault and launches Dibs out of a window when he tries to double-cross her and have the treasure for his own future. Casper and Kat trick Carrigan into stating that she has no unfinished business on Earth, causing her to be involuntarily ejected into the afterlife. The alleged treasure is revealed to be Casper’s prized baseball, signed by Duke Snider. When Dr. Harvey returns with Casper's uncles, now as a ghost, Kat is distraught. Her despair prompts Casper to sacrifice his one chance to return to life once more, restoring her father instead.

The Halloween party kicks off upstairs. As Amber and Vic prepare their prank, they are thwarted by the Ghostly Trio, and flee the manor in terror. A dejected Casper is visited by the spirit of Amelia, who has become an angel in heaven instead of a ghost. As a reward for his selfless sacrifice, she temporarily transforms him into a human boy, until ten o’clock. The now flesh-and-blood Casper dances with Kat, while Amelia speaks with Harvey, revealing that she was so content with her husband and daughter while alive, that she has no unfinished business, encouraging him to move on. Amelia departs as the clock chimes ten and, after kissing Kat, Casper transforms back into a ghost, which scares off the party guests, leaving him and the Harveys to dance to the Ghostly Trio's music.

Zelda Rubinstein stated that she reprised her role from the Poltergeist film series but the scene was cut. Ben Stein makes cameos in several other Casper films and even guest-starred in an episode of this film's animated spin-off, The Spooktacular New Adventures of Casper.