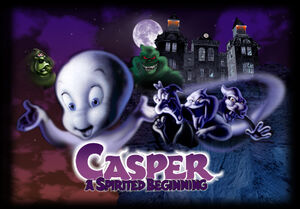 Casper is on a train full of ghosts, with no idea of where he is and is completely unaware that he is a ghost himself. Instead of going to Ghost Central, where the train is headed, he is kicked off the train. Casper then finds himself in the city of Deedstown, where he unintentionally scares all of the town's citizens. Only then does Casper realize that he is in fact a ghost.

Meanwhile, a boy named Chris Carson, a loner with a passionate obsession with the supernatural, and his father, work-obsessed Tim Carson, who is attempting to demolish the Applegate Mansion to begin plans for a new renovation for the town. However a group of protesters, led by Sheila Fistergraff, are against the demolition of the building, which they consider to be a historic landmark. Tim tries to reason with them, saying that the old building is falling apart and that he only wants to improve the community by building a new mini-mall in place of the old mansion. The protesters refuse to give in, but just as the bulldozer is about to tear down the building, both the wrecking crew and the protesters are tormented by Stretch, Fatso, and Stinky, the Ghostly Trio. They scare everybody away and take possession of the old mansion.

Meanwhile, Chris runs into a gang of bullies on his way to school who tease and torment him about his obsession with the supernatural. The frightened victims from the ghost attack run past them, allowing Chris and his tormentors to flee. Chris enters the mansion and meets the Ghostly Trio, who are celebrating their victory. Chris desperately wants to become a member of the Ghostly Trio and he enthusiastically asks them if he can join their group. But the trio just rebuffs him and harshly reject him, since he is a human.

Meanwhile, the train that Casper was on arrives in Ghost Central, where new spirits are trained to learn the proper ghost lifestyle and work to receive a haunting license. Ghost Central is run by the evil Kibosh and his spineless assistant Snivel who realizes Casper is missing. Kibosh immediately becomes furious and worried about how he would look if some rookie ghost is wandering around without any proper schooling. Kibosh orders Snivel to find Casper and bring him back to Ghost Central.

Back in Deedstown, Mayor Johnny Hunt informs Tim that if Applegate Mansion is not demolished by the next day then he will be fired. At school, the bullies try to pull a prank on Chris by dropping a balloon full of gunk on him, but it fails and lands on Principal Rabie. Angered, he seizes Chris and a bully named Brock. But Chris is saved when his teacher, Fistergraff, intervenes and says that Chris should stand up for himself. A news report then comes on the TV, with the mayor and Tim telling the press that the demolition project will proceed as planned, despite numerous setbacks, by which Fistergraff is outraged. Chris runs into Casper and they instantly become friends. Chris is thrilled to meet another ghost and Casper is excited to find a human who will not scream at him or run away; and both Casper and Chris have something in common. Together they go to Applegate Mansion. Casper admits that he doesn't know how to act like a ghost. Chris tries to teach Casper how to act like a real ghost. But then the Ghostly Trio shows up and confronts Chris. Chris introduces Casper to the Trio who are impressed with meeting another ghost and become excited when they find out that Casper never went to training, and is therefore unspoiled by Kibosh. The three ghosts see a golden opportunity to prove that their techniques are better than Kibosh's. If they succeed, then maybe Kibosh will stop searching for them. The Ghostly Trio decide to accept Casper as part of their group and teach him everything they know. However, unknown to them, Snivel finds them (and was eavesdropping) and leaves to inform Kibosh.

And so Casper's ghost lessons with the trio begin, and Casper learns all kinds of new things, like how to go into "stealth mode" (become invisible) and how to go through solid walls. Meanwhile Snivel calls Kibosh and informs him that he found Casper with the Ghostly Trio and that the trio has been teaching Casper unorthodox and illegal ghostly techniques, which angers Kibosh.

Chris is disappointed when his father does not show up to his school's open house that night and Fistergraff tries her best to comfort and support Chris. However, back at the mansion, Casper is still lacking the ability to act scary, because he just wants to be friendly. With that the Trio sends Casper out. The next morning Chris is still disappointed that his dad did not show up and Tim promises to spend more time with him. Chris is excited until a sad Casper floats into to his room and informs him what happened. Chris offers to help Casper and teach him what he needs to know. While Chris is giving Casper ghost lessons at school, Brock and his gang show up and tease Chris. Amazingly, one of them, Jennifer, sticks up for Chris. Brock gets attacked by Casper and gets into trouble with the principal.

Excited by his accomplishments, Casper flies off to test his new powers. He is able to scare away a man who attempts to rob a convenience store and the owner of the store thanks Casper for saving his life. Casper is ecstatic and decides to use his ghostly powers to help people. Meanwhile, Tim's office catches on fire because of an accident caused by Bill Case, a professional bomber hired by Tim, and he is unable to attend the meeting. Disappointed, Chris storms off but soon becomes hopeful that his dad will remember their other plans. Fistergraff shows up at Chris's house to return something that he left at school and Chris briefly invites her inside for a short visit. Snivel sees Casper acting like "the fleshie's slave" and leaves to report back to Kibosh. This is the last straw before Kibosh takes matters into his own hands.

The Ghostly Trio find out about Casper's good deeds and abduct Casper. Chris tries to introduce Tim to Casper, but Tim does not believe Chris, throws some of his belongings in the trash, and leaves to visit the mayor. Chris is fed up with his fatherls promises and runs away from home. But then Brock and his gang grab him and lock him in the mansion, unaware that Bill had planted a bomb inside.

The next morning, Kibosh arrives in Deedstown and captures The Trio. Snivel is sent out to find Casper. Tim wakes up and discovers that Chris is gone. He finds a note from Chris saying that he ran away. Casper flies in and meets Tim, who is at first frightened but then he listens to Casper and they both decide to go out and find Chris. Tim rushes to save Chris when he learns that his son is in the Applegate Mansion, which is about to explode and manages to hitch a ride with Fistergraff. Casper arrives at the mansion and finds Chris trying to escape. Tim gets his son out of the house and Casper eats the bomb which explodes in his stomach, saving the mansion. Kibosh is impressed with Casper's trick and Casper informs him that the Ghostly Trio taught him how to do it. Kibosh says that only ghosts who are a family can haunt together, so The Trio lies to Kibosh and say that they are Casper's uncles. Kibosh allows Casper to stay with his 'uncles' and leaves them in peace. Chris and his father reconcile and Brock's gang get their comeuppance when the Trio hang them from the branches of a nearby tree.